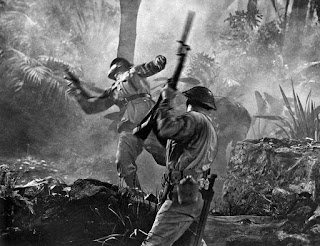 Weeks had been spent converting the vast space inside an industrial warehouse into a carefully reconstructed microcosm of a battlefield. The floor was layered with soil and pockmarked with meticulously hand-dug craters.  The entire back wall was painted with a mural of parallel barbed wire wrapped trenches that stretched off into the horizon and disappeared into the darkness spreading under a descending sun.
Soma, a dreamy teenage soldier serving on this mock battlefield, watched with quiet resignation as stagehands dressed as soldiers scattered themselves in front of the oscillating barrel of an unloaded machine gun. The other three men in Soma’s make-believe unit were all about the same age, but more importantly, they were the same height and had similar physiques. They hadn’t seen any action, but few others in the imperial army wore the uniform so well.
Soma’s country had been at war for the last three years. His brother died as a hero defending the frontiers of their ancestral home. Soma spent more than a year of his waning childhood making promises to a makeshift altar to his fallen brother, it was no more than his medals and a single photograph.
On his seventeenth birthday, Soma enlisted. He was a tall, handsome boy with a lean figure, broad straight shoulders and a spine that never seemed to bend. He hadn’t even completed basic training before a Colonel took notice of the “exceptional specimen” and recommended him for a “special assignment.”
When Soma tried to politely decline the assignment and ask to be sent to the front, he was gently but firmly reminded that it was not his choice.
The old Colonel looked the boy up and down “You just might be the hero our country needs right now,” the Colonel said with a winking grin.
Soma was relieved the Colonel wasn’t on set. The officer destined to lead the dramatized charge across the simulated no-mans land was Captain Pasic. From the opening days of the war, Pasic had earned a reputation as a selfless leader of fighting men. Millions of entranced young men watched portrayals of Pasic’s heroic exploits on flickering screens across the country.
Pasic’s entrance onto the set was presaged by frantic preparations of a dozen stagehands. They brought out a special, a small table with a cup of tea and a glass of brandy. Another one put down a large black box between the idle soldiers and scurried away.
Pasic strolled onto the makeshift battlefield and nodded approvingly. He was about average height and had a physique that seemed to be slowly melting away into a soft, flabby form. His uniform adorned with metals jangled when he walked, and the polished leather belt strained against his swollen belly.
He walked over to his waiting company, and the men immediately came to attention. Pasic stiffened his back and returned the salute before stepping up on to the black box that put him ahead above the much younger and more strapping soldiers.
He looked down at Soma. “I don’t believe we’ve met,” he said.
“Private first class Nagy!” Soma said with a click of his heels.
“Such an earnest young man,” purred Captain Pasic. I think you’ll do well here.”
“Thank you, sir,” Soma replied while Pasic eyes drifted from the pristinely dressed soldier’s boots to his chiseled jawline.
A prop handler walked over carrying Pasic’s calvary sword.  Pasic took the sword and practiced his pose for when he’d call for the charge.
“All ready!” He shouted after a moment.
The rolling camera started its steady rhythm of mechanical clicks, and Pasic raised his sword to the sky.
“Alright, men fix bayonets!”
They attached the blades to their rifles and waited for the signal. Soma looked across at the actors dressed in the enemy uniforms waiting to pantomime being slaughtered and felt tears welling in his eyes. He spent the rest of the day playing soldier in front of the rolling cameras
Once the shooting was over they were dismissed, and Soma quietly slinked away from the studio, but Pasic caught up with him.
“Excellent work today boy!” Said the jovial captain as he gave Soma a hardy slap on the back.
“Thank you, Captain,’ answered Soma.
“We’re off duty no need for such formalities,” said Pasic. “You can call me Pasic.”
Soma nodded.
“Where are you off to then?” asked Pasic.
“To my barracks,” said Soma.
“Nonsense why don’t you join me in the officer’s club for a brandy?” Pasic suggested.
“Will I be allowed in?” Soma asked.
“Don’t worry you’re with me,” Pasic winked.
Pasic draped his arm around the boy, and they walked down the street together, and Pasic talked to Soma about his burgeoning new military career. “I know people,” he said. “Stick with me, and you can go far.”
They rounded the corner and were confronted by a man in a ragged corporal’s uniform that hung from his emaciated body. His left pant leg was sewn over the nub where the appendage used to be. He saluted when he saw them. His body wobbled, and he steadied himself on his crutch.
“Please can you spare anything for an old soldier who has no more place in war?” he asked pitifully
Soma reached into his pocket, but before he could scrounge anything for the dejected man, Pasic stepped in. “We don’t give handouts to vagrants,” he sneered at the broken soldier.
Pasic grabbed Soma by the hand. “Come, Soma, I want to see if you know how to waltz.”