There are no closets in foxholes 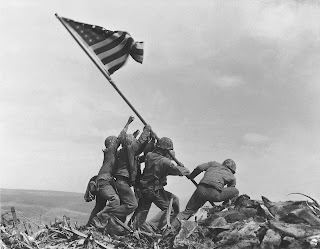 Private Stuart Breyers had joined the marine corps during peacetime. The plan was to use his two-year hitch as a transition period into becoming an independent young man. Not six weeks after his 19th birthday the boy’s limited term of existence had been significantly curtailed. He had no more years to look forward to only mere moments.He walked in a single file line with his comrades under the darting eyes of their Japanese captors. His fingers were laced behind his head, and he didn’t dare move his hands to shield his eyes from the blinding tropical sun or the salty sting of his sweat. Breyers had spent his life in the vast cornfields of Middle America where the grey skies of winter lingered for months on end. The Pacific sun turned his flesh a pulsing red. The Japanese fleet loomed ominously in the still crystal blue waters. The massive steel barrels of their guns had returned to their resting position. Occasionally a grenade blast in the thick jungle rattled the birds out of the trees. The panicked creatures squawking overhead dropped their own green and white ordinance on the sun glimmering white sands. Sometimes the Japanese took shots at the birds but other than that the fighting was all but finished.They were lead inland until the shore was out of sight. The line procession came to a sudden halt when the leading man saw the shallow trench at the end of their path. Bryers' knees were trembling too hard for him to put one foot in front of the other.“C’mon don’t make this harder than it has to be.” the man behind him whispered as he nudged Bryers forward before the guards could notice the boy’s physical display of hesitancy. 12 of them were lined up at the edge of the slit. Bryer’s glanced down into his mass grave and saw the bugs writhing in the dirt waiting to receive their own tidings of war.The firing squad lined up in front of them. Thier officer stood off to the left holding up the long gleaming blade of a samurai sword. He issued an order in his harsh native tongue and the executioners raised their rifles.Bryers clenched his eyes shut. His breath turned into a rock that fell into his stomach. He wondered if he’d hear the shot.“Wait! Hang on just wait for a second!”There was some murmuring, and Breyers realized he was still alive. He cautiously opened his eyes and saw First Sergeant Ferguson stepping out from the front of the line with his hands in the air. The Japanese seemingly taken by surprise had no opened fire.“There’s just something I want to say before we die. Well if I may,” he added quickly giving the Japanese commander a sincere look of deference. The pitched face imperial soldier looking slightly annoyed gave a nod of approval.Ferguson took a few more steps out and turned to face the line of condemned men. The Sergeant was 6’2 with sun-bronzed skin and muscle tone. Like Hercules, if he’d been from Southern California.“First it’s been an honor leading you fine soldiers into battle. There is no need to feel any sorrow or shame. You did the best with what you had, and I truly believe you did the better under the circumstances than any other unit could ever have hoped to do!”Bryers exhaled deeply. The Sergeant's kind words might not have been much of a consultation, but they did relieve some of the stress of imminent death.“All that being said. There’s something I’ve wanted to do for a long time, but I’ve never had the guts. Phil comes up here and join me please.”Corporal Phillip Casey was a stout man with a somewhat rounded face and neatly trimmed black hair. His beady eyes betrayed a smile as the Sergeant held out his hand to the Corporal. Everyone looked on in silence as the two men locked eyes for a second and passionately kissed. There was a collective gasp.The executioners lowered their rifles and began to murmur to each other. Their Commander's stood slack-jawed as he dropped his sacred sword in the dirt.“Me and Corporal Casey are lovers. We have been for almost two years.”Ferguson hesitated for a second. “We’re gay,” he finally said.This event seemed to take precedence over the business of execution. The shooters were talking among themselves, and the men they were supposed to have shot were now wrapped up in something else entirely.Suddenly impending doom was the furthest thing from Bryers mind. He hadn’t seen much of the world. In fact, being marooned on this godforsaken island in the middle of the Pacific was the only traveling he had ever done. He figured he’d be in for some surprises, but he’d never expected anything like this.“Wait, so guys are both men who kiss?” He blurted out his question.The heavy silence returned, and everyone turned to look at the perplexed boy Marine.“Yeah that’s about the size of it,” Furgeson replied.Bryers pondered that for a  second. “Permission to ask a question of a personal nature sir,“Permission granted,” replied Ferguson.“What about like bedroom stuff."The boyish virgin's euphemism amused the Corporal"Do ya’ll do that stuff together?”There was an audible gasp at the question.The corporal nodded. “Yes that’s right,” he said.“Huh,” Bryers said as he processed this information.“I ain’t never heard of that before,” Bryers said.“Hey sarge you’re still ok with me!” A private enthusiastically called out.The Marines cheered their unanimous approval. The Sergeant and the Corporal kissed one more time before tightly embracing."I love you, Phillip Casey!""And I love you, John Ferguson!"The Japanese commander barked an order, and the firing squad fumbled with their rifles. The soldiers started firing wildly and tore apart their prisoners with a wall of lead.  It's true nothing inspires courage more than the cold stare of death. For whatever reason, Sergeant Ferguson like all men felt the need to unburden the consciousness that was going to depart from him.

THE END:
Now, a little note from the author:
About seven years ago two stories I submitted were printed by an Australian based literary magazine called Skive. Just a few months later more of my work was accepted by a publisher in Scotland and another in Kentucky. That’s when I knew the first time hadn’t been just a fluke! From then on I wrote as much as I could and submitted work anywhere I could.
As it stands, my work has been printed in 11 different volumes and has been featured in numerous ebooks as well as distributed on literary-themed websites. I try and be as industrious as possible and strive for at least two short stories a month. Usually, these are about 1,000-3,000 words. I have no plans to commit myself to a novel my style just works best at that length. So take a look at my work. If you donate, you have my undying gratitude! Even if you don’t but at least come back and see what I’ve written from time to time that would be greatly appreciated as well.