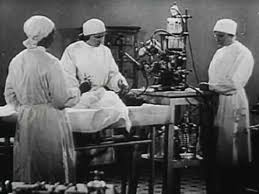 At eleven and fourteen years, respectively, Doctors Joaquim Jerome and Erica Lee were veterans of the medical research labs circuit and, as a matter of professionalism, were never averse to inflicting horrific tortures upon a never-ending pool of rodent and simian subjects. Vivisection, experimental drug trials, and cosmetics, these were all ways the high priests of progress paid the proper blood tributes.
Being as such, the illustrious researchers had no qualms about working with cadavers.
"I kill things all the time," Erica shrugged. "Why would I shy away from electrocuting corpses?"
Barely ten hours ago, a man named Michael Doland expired and left behind the quickly crumbling biological shell now known as cadaver number 4. While you could count on both hands, all the people who might remember Michael Doland Cadaver number 4 was going to be internationally known before the day was over.
Neither Joaquim nor Erica had ever met Michael. For the two aspiring necromancers conquering death was not a passion project as it had been for Doctor Frankenstein.
They had different motivations since some of the wealthiest people in human history, many of whom had made their unbelievable fortunes reshaping the human experience, found themselves part of a generation being swallowed up by oblivion funding any experiments that might help find a treatment for death seemed a sound investment. In fact, it was the only investment that offered any hope of holding onto it all.
The lab was like something out of a scene from the gilded age of science fiction. Dozens of specialists fawned over an array of electronic monitors that were all in one way or another wired to a lifeless body strapped to a cold steel gurney in the middle of the room.
"All ready on your end?" Erica asked.
"Yep," Joaquim replied, gazing down at a chart.
Erica nodded towards the body. "This is the last one they're going to give us today, so we're wrapping up after this," she said.
"Alright, I'm getting hungry anyway," Joaquim mumbled.
"Alright, people, this is our last run of the day!" Erica announced for the room to hear. "Are all systems ago?"
The technicians checked their respective monitors and gave the go-ahead.
There was a faint electrical hum in the air that steadily grew in volume and pitch. The body's muscles contorted and pulsed beneath the softening flesh like earthworms writhing in mud. They alternated the currents, and the subject's face, once frozen with rigor mortis, began to move and contort. His blue lips curled into a smile, his eyelids peeled back, revealing faint grey pupils. So far, this trial wasn't proving any more promising than the others.
"We've got blood flow!" A technician informed the room.
"OK, keep it going, keep it going," Erica said, looking down at her watch.
More of the body's atrophying muscles started to contract as the flow of electrons was directed into their fibers. Soon the body was shaking and spasming against the restraints.
"Woah, we just got something on the EEG!" Joaquim said excitedly. As if on queue, the other machines started frantically beeping.
"Is it sustaining?" Erica asked anxiously.
"Yes! We brain activity!" Joaquim shouted triumphantly.
The cadaver's eyes were circling in its head, and its mouth was moving around as if trying to form words.
Erica approached the gurney and stood over the squirming corpse.
"I think it's trying to speak!" Erica said excitedly.
She yelped when she felt a cold, waxy hand close around her wrist. The cadaver's eyes were staring right into her own. It struggled to form words. "Don't make me go back," It choked before going limp and falling back silently into death. The machine also quieted.
Erica was stifled with fear. She stood frozen next to the body with everyone in the lab staring in disbelief.
Joaquim broke the silence, "We did it!"
Erica was shaken, but in the end, she had simply accomplished what she had set out to do, reanimate the dead, and while the results weren't ideal, they were a good start. She tried to brush off the incident but cadaver 4's plea repeated in her mind.
"Don't make me go back!"
Go back to where? When they brought life back to that body, did the memories of the person who used to inhabit that cold grey shell return? Did they pluck someone from eternity to torture with a sudden and fleeting glimpse of life? Or was that not Michael at all, just jolted grey matter? Maybe one day, Erica would find out for herself.


THE END:
Now, a little note from the author:
About seven years ago two stories I submitted were printed by an Australian based literary magazine called Skive. Just a few months later more of my work was accepted by a publisher in Scotland and another in Kentucky. That’s when I knew the first time hadn’t been just a fluke! From then on I wrote as much as I could and submitted work anywhere I could.
As it stands, my work has been printed in 11 different volumes and has been featured in numerous ebooks as well as distributed on literary-themed websites. I try and be as industrious as possible and strive for at least two short stories a month. Usually, these are about 1,000-3,000 words. I have no plans to commit myself to a novel my style just works best at that length. So take a look at my work. If you donate, you have my undying gratitude! Even if you don’t but at least comeback and see what I’ve written from time to time that would be greatly appreciated as well.