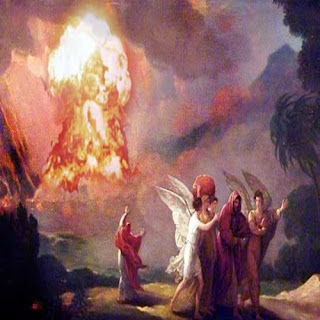 “Ichika, Ichika wake up!”
The six-year-old girl was jolted away by her father’s hands. Her mother was standing in the doorway, clenching her little brother Reo against her chest.
The majority of Ichicka’s short life had been against the backdrop of total war. She dutifully kept her boots and shelter knapsack ready to go at the foot of her bed and made sure never to let go of her father’s hand in the crowded shelter. Reo was even more accustomed. The desperate stampedes to the overcrowded shelters were becoming his earliest memories.
Her father grabbed her by the hand, and they rushed out into the street. Ichicka’s father was walking too fast for Ichika to keep up, and the girl stumbled. Without a word, her father picked her up and started walking faster than before.
“Please hurry,” he urged his wife, who was also struggling to match his pace.
Despite her father’s panic, the city seemed peaceful. The streets were virtually empty, and the sirens were silent.
“Hideshi!” Aiko called to her husband when he passed the turn to their designated shelter.
“Just keep following me,” he commanded.
“Hideshi, where are we going?!” She pleaded
Hideshi looked at his watch. “We only have a little over three hours. At 8:16, a star is going to explode and kill us all!”
When he stopped hearing Aiko’s footsteps, he turned back and saw her sobbing. “Aiko, there is no time for this. We must leave now!”
“You’ve gone crazy,” she sobbed.
Hideshi straightened his back and looked down sternly at his crying wife. “I am your husband, and you will do as I say!” He barked.
Aiko was crying too hard to answer coherently. She shook her head and backed away from her approaching husband.
“Give me Reo,” he growled.
Aiko shook her head, “please no,” she sobbed.
Hideshi grabbed for the child, and Aiko pulled the frightened boy tighter against her. The boy started to wail. Ichika watched her father pry Reo from her hysterical mother’s hands and slap her across the face. She shuddered at the snap of his palm against her soft cheek.
“The heavens have shown me the starbursting over the dome. It will summon a demon made of fire that will kill everyone it touches. I have been chosen to father a new kingdom away from this cursed place!”
The empire of the sun was swiftly decimated under the merciless gallop of death’s white horse. Starving widows and their children sat in the dark, waiting for the heralding sirens to precede a torrential downpour of fire that turned entire cities into mass sites of human immolation. When parents put their children down to sleep, their goodnight could also be a goodbye. It seemed like the shadow of death had finally broken Hideshi.
Aiko yielded to her husband and quietly followed him on his mad exodus, hoping he might come to his senses. He did not. He kept up the tempo. Even as the ascending sun dispelled the dangerous shroud of night, Hedishi would not stop. Then abruptly, he stopped to look at this watch. “8:15,” he muttered.
They had made it to the outskirts of the city. Aiko stood quietly with downcast eyes, so the weary children had to look to their father.
“Everyone duck right now! No matter what you do, no matter what happens, do no look back at the city!” He shouted.
The children got down and covered their heads. Hideshi covered their bodies with his own, and they waited. After a few seconds, Ichika opened her eyes and looked down at the grass. Suddenly a flash of the whitest light her eyes had ever seen spilled across the ground. There was a deafening roar, and the earth started to shake. She heard her mother cry out in pain. “Hold on!” her father screamed.
Their bodies were picked up by an invisible wave and tossed into the air.  Ichika saw the rising black spire spewing fire into the sky. Its deafening roar tore into her ears, and the heat in the air prickled her skin like fire’s close touch.
When she regained her balance, she saw her mother on her knees, burying her face in her hands. After a moment, her hearing started to return, and she could hear the screams. Blood began to spill out from between her slender fingers, and she lowered her hands. Her eyes were molten pools of blood draining from their sockets down her tender cheeks.
Ichika struggled to her feet and ran to her mother, but Hedishi stopped her.
“No!” he shouted as he pulled her against him. She struggled against him but couldn’t escape his grip.
“She was told not to look upon the light, but she did so anyway. There is no place for her in the holy kingdom!”
Hideshi carried the children away from their blinding mother as she begged for help.
“Don’t look back,” Hedishi whispered.
Whether as part of a long-term plan or just on impulse in the pre-dawn hours of August 6th, 1945, Some manifestation of divinity cast Hedishi, the devoted husband and father, in the role of the Cassandra in its own theater of destruction. Hedishi obeyed the spirit screaming in his dreams. After all, the price of defiance was oblivion. Like Cassandra, though, the only power in his foreknowledge was its capacity to make the bearer of its weight suffer.

Thank you for reading!
About seven years ago two stories I submitted were printed by an Australian based literary magazine called Skive. Just a few months later more of my work was accepted by a publisher in Scotland and another in Kentucky. That’s when I knew the first time hadn’t been just a fluke! From then on I wrote as much as I could and submitted work anywhere I could.

As it stands, my work has been printed in 11 different volumes and has been featured in numerous ebooks as well as distributed on literary-themed websites. I try and be as industrious as possible and strive for at least two short stories a month. Usually, these are about 1,000-3,000 words. I have no plans to commit myself to a novel my style just works best at that length. So take a look at my work. If you donate, you have my undying gratitude! Even if you don’t but at least come back and see what I’ve written from time to time that would be greatly appreciated as well.