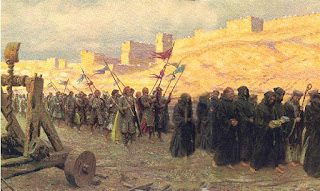 The Crusader army had degenerated into a collective of scavengers living among growing piles of emaciated corpses. The parched soil under their feet dried into dust that swirled in the sunshine like bile colored snow before gently falling onto forsaken fields that cultivated only corpses.
Razoul had made a fortune gouging the Crusaders. The price of simple staples inflated to sums only the princely could afford, even then only briefly.  A hen carcass and six eggs were all that remained of Razoul's inventory. Just as well. Razoul had more than enough gold now.
The way to the Crusaders camp was crowded with soldiers turned beggars. They kneeled in the dirt, holding out open hands.
Razoul avoided the gaze of these living corpses who had given up on begging God and were now pleading with him. They were answered with a cloud of dust.
Only three Noblemen came to see Razoul's wares, this market was squeezed dry.
"This is the last of my stock," Razoul said dangling the hen's limp carcass by its feet.  Moments later, the three knights were destitute.
One had traded away family jewels; heirlooms passed down through generations. Now that his ancient bloodline was at its terminus, it seemed ok to part with the shimmering rocks.  He devoured the boiled egg and immediately started sobbing as the truth set in that now it was just a question starving tomorrow.
"This is the absolute last of your wares?" One knight asked.
"That's all. Soon I may go as hungry as you!" Razoul joked.
"Then there's no more use for you," the Knight said.
Razoul backed away. "Remember the first commandment," he pleaded.
The Knight drew a dagger. "I'm willing to wager you haven't read the whole list," he said, driving the blade into Razoul's belly.

If you like my work, please consider making a donation. I one day hope to have enough to hire some artists to work with and adapt some of these pieces into graphic novels. In the meantime, though most of the money will probably go towards pot and coffee.