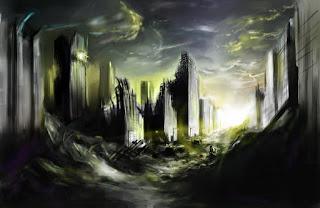 They seethed from the Earth like a swarm of insects. Countless thousands that had been laying dormant in the soil waiting until a sufficient number of them were ready to emerge to fulfill a singular purpose. These were not the organisms forged by the pressures of nature that erupted from the ground whenever the rhythmic cycle of life demanded. These hives were the machinations of a scheme hatched by moribund creators who were cognizant and rational enough to know time was short but still delusional and optimistic enough to believe they could reach across the chasm of death to direct the reincarnation of a civilization whose ashes blanketed the globe.
The project was the brainchild of a cabal of intellectuals and engineers who faced Armageddon with the same poisonous optimism that had made the approaching doom a foregone conclusion. The power wielded by the technological mages would seem just as mythical to the people that came before them as it would to the people who were destined to live in the aftermath of the horrific cataclysms that were expected to be the end results of decades of unprecedented progress.
The insect-sized drones had originally been developed as a weapons platform. They flew silently and could not only infiltrate a room they could clandestinely invade the human body and commandeer the bioelectrical process of a host’s brain. Believing a different set of intentions justified the existence of such a murderous synthetic life form retooled the design for self-declared humanitarian purposes. This new generation was designed to be a boon to human creation. Each bug could imbue its host with the means to recreate all the essential elements of settled human existence. The knowledge collectivity accumulated by a species over the span of millenniums held inside the nearly microscopic memory banks house inside the hollow frame of their mechanical bodies.
Solar powered hives were sent to every corner of the globe. Their highly publicized project was dubbed “Renaissance.”  It was the product of a society collectively straddling the line between denial and acceptance. Hope was the best form of escapism to a civilization teetering on the edge of the quiet and endless abyss of oblivion. Like all other natural phenomena, the minds behind Renaissance believed the finality of death was something that they could work around. These gods spun the top from across the ever widening gap of time. Any possible trace of who they were disappearing in infinitely receding time. The reborn civilizations they brought into the world would never know to whom they owed their very existence.
The automated drones dispersed into the wind to seek out the unwitting founders of the new metropolises that would rise from the ashes. The bugs ran on solar cells. This was to guarantee a renewable supply of energy so each unit could have more time to find a suitable human host. Unfortunately, this proved to a design flaw that rendered these creatures fundamentally unfit to survive in their habitat. Many never emerged from their concealed nests having either been buried beneath mounds of debris while others had terminal flaws in their base coding that precluded them from ever emerging into their digital consciousness. The other more viable units emerged into conditions far more inhospitable than those anticipated by their designers.  Despite what at the time were considered the most accurate projections sunlight had still not penetrated the particle saturated air. The bugs buzzed blindly through a thick fog of dust that was only faintly lit by the faint rays of a cold white sun.
Like the naturally occurring organisms, they were built to mimic the Renaissance swarm was given the mandate to fulfill during its fleeting existence. They searched ceaselessly. Before long the cloud began to dissipate as more and more of the drones fell back to the earth. Their light metallic bodies left to be swallowed back into the soil.
They swept across the landscape fixing on any trace of relatively recent human activity. Ever word scrawled across a wall, any corpse that hadn't been stripped of all its flesh was a potential sign, but the trail quickly went cold. Their numbers continued to dwindle at an ever accelerating rate. The algorithmic based operations of the hive mind eventually dispersed the individual units in all directions. It was a last ditch effort, a survival protocol that was triggered when the extinction of automated life was deemed imminent. Each unit flew in its own direction to explore the immolated husk, up until the very last one dropped from the sky, concluding a brief and futile existence before joining their creators in oblivion.