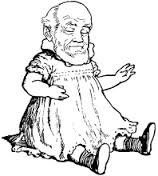 
“Eh, there’s not much here to talk to. Kid’s barely six you’re not losing much. I’m going to have the advantage of going through life with more than 37 years of experience packed into this little brain. I’m going to rock this shit this time!”