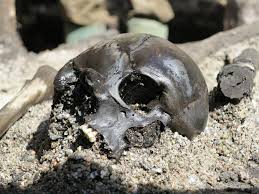 Perhaps it’s a small stroke of luck that the collection and burial of an army’s dead is considered an honorable practice. The world is littered with battlefields where despite the breadth and scope of the savagery and massacre there is scant evidence of what happened. Nature fills in shell craters, rusts away the metal, rinses the blood from the soil, but not before grave diggers like eleven-year-old Thomas dragged the bodies from the field and deposited them into a muddy slit they gouged into the earth.
Thomas had wide blue eyes and a slender frame whittled by hunger.  Like most of the others, he was plucked from the depths of the smog-choked plague-infested slums that were growing out from around the smoke-belching stacks like a spreading infection.  They were familiar with the site of a man that had been decomposing for some time and was starting to melt into the mud making a murky soup.
Winter exasperated the cruelties of burial detail. Thomas worked by torchlight in the moonless night using a pickax to break through the frost hardened earth. His shallow ivory cheeks were flushed red from exertion and the gnawing cold. His blistered hands gripped the shovel with malformed joints. The inside of his work gloves was coated with layer upon layer of dried blood left by previous wearers. Thomas had added a fresh coat. As worn and tattered as they were Thomas was still grateful to have them. The contorted frostbit fingers every bit as twisted as those of the corpses they were burning were a grim reminder of his modest but considerable fortune.
When their work was finally finished, they crawled out of the mass grave they had just dug and watch the bodies get laid out at the bottom in two tidy rows. While the dirt was being thrown over the fallen men Lord Colonel Hastings the commanding officer of the regiment delivered an address to the collection of human refuse who followed in the wake of the army, scavenging its mess hall and even its dead.
Every time it was the same, the boys, as well as the colonel's entourage, would lower their heads and patiently wait for their commander to half-heartedly deliver an off the cuff mass eulogy for people who had often died because of him personally.
“It is with a heavy heart we must commit these brave men to the ground so far away from our beloved motherland. However they were compelled to give their lives away because they cared so deeply about their love of country,” declared the full faced Hastings, his puffy cheeks were flushed with the warmth of the whiskey that stained his thick white mustache. “Hmmph,” he cleared his throat.
“They are gone, but their sacrifice was not in vain,” the colonel said with upturned glazed eyes. “It is thanks to their sacrifice that victory is now so close at hand,” The Colonel slurred with confidence.
“Ahmen!” He belched after a moment.
“Ahmen,” everyone responded before lifting their heads.
Hastings glanced across the grave toward Thomas. “God willing one day you boys have the same opportunity to serve your country these lads had,” Hasting’s said grimly
Thomas looked down at the bodies. Their empty eyes met his gaze. Some of them were blood splattered monstrosities with teeth clenched by Rigger Mortis that set their face in the agony and terror they faced death with.
For others decomposition had set in before death. They were brittle and emaciated. Their colorless skin receded around their bones sinking their blank eyes deeper into their skulls. Peter felt a chill, and his stomach suddenly felt hollow. Being left in one of these holes was the best possible outcome his future could afford him. He could be buried with a large group or could be left alone in an alley or be kicked into the river that bisected the city and be carried off by the cloudy waters ceaseless current.
Thomas shuddered and started quickly shoveling in the dirt.
“Send that one to my headquarters when you’re done here,” The Colonel burped into a soldier's ear and pointed at Thomas. The soldier dutifully saluted and shot Thomas a glance the boy pretended not to see but still caused his heart to race. He didn’t know what might happen, but the corpses reminded him he could only hope for the best and take whatever comfort there was in knowing time buries all.