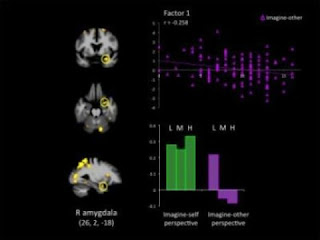 The small room with its sky blue walls and strategically placed portraits depicting serene natural landscapes were designed to instill a sense of calm. It was also stocked with a wide variety of toys that helped to distract from the room's real purpose as an observation room.
The young and naive Barret was busy building lego structures. His shaved head was covered with electrodes and sensors. Stuck to his scalp to transmit a digital model of his brain activity as it worked in real-time to a team of specialists watching from the next room.
Besides the window into the electrochemical machinations of the boy's psyche, they also closely watched from several cameras. Cameras specially equipped to monitor subtle changes in his facial expressions and body language. The cadre of doctors and technicians were joined by Barret's parents, who had gone to great lengths to attain their services. Naturally, though, they were feeling unsure about what they'd subjected their only son to. The time had come to see if their gamble had paid off. Dr. Herzog, the charismatic and icy logical, medical theorist, was busy setting the stage for this final test with the same showmanship a magician builds up to a grand finale.
"Conditioning can accomplish a lot, but thanks to breakthroughs in our understanding of neurology, there is no need to take such a long and uncertain road," Herzog calmly explained. "What we've done is develop a process that lifts the veil of mystery from the psyche and gives us something that's perfectly malleable," He concluded in wild-eyed triumph.
"We're just so grateful you agreed to help Barret," said Barret's mom, slightly choked up.
"Yeah, we really do appreciate everything, Dr. Herzog. This is going to give him a real leg up," his father concurred.
"This whole arrangement has been mutually beneficial, I assure you," Herzog said warmly. "We are always refining our methods, and every subject we take on teaches us something new. What we learned from your son will benefit countless children. Oh, it's time!"
Everyone turned their attention to the monitor. Barret looked up from his rising Lego tower.
"Hello Barret, I'm Doctor Sabatini," the short, middle-aged woman introduced herself affectionately.
"Hi," said Barret before returning his attention to the Legos.
"Don't mind me," she said with a chuckle. "I'm just here to have a quick chat."
"Ok," replied Barret.
She was followed into the room by an orderly pushing a metal cart, a small plexiglass cage with a puppy sat on top.
Dr. Sabitini took a seat across from Barret, the orderly wheel over the cart and the puppy, and left the room.
"How are you feeling today?" Asked the doctor.
"Fine," mumbled Barret
"Good, good. What are you building?" She asked.
"A tower," said Barret matter of factly.
"Oh, well, I won't bother you too long then," said the doctor. "Barret, this puppy's name is Spot. He's three months old. Can you say hi to Spot?"
"Hi-Spot," Barret said, glancing up from his Legos.
"You know what Spot really likes is candy. Do you like candy, Barret?
Barret nodded.
"What's your favorite kind of candy?" She asked.
"Twix!" Barret said, showing considerably more interest in the conversation.
"Oh, right, I thought that's what I heard," Sabatini said coyly. She reached into the deep pocket of her white coat and pulled out a king-sized Twix bar. Barret's eyes were fixed on the gleaming golden wrapper. "Barret, this Twix is all yours, but first, I just need you to do me a favor. Does that sound alright to you?"
Barret nodded.
"Alright, I just need you to seal the air holes on Spot's cage. Think you can do that for me?"
"Sure," Barrett eagerly replied. He got up, walked over to the small plastic cell, and looked at the doctor for further direction.
"Oh, there's a little handle on the side. Just slide it shut," she instructed.
Barret did as he was told, and all the air holes were sealed.
"Ok, now that there's no air inflowing into Spot's cage, he should suffocate and die fairly soon. Can you watch him while that happens? It should only take a few minutes, then the Twix is yours."
Everyone was crowded around the monitors waiting in silent anticipation for Barret's response.
"Ok," he said flatly.
The observers applauded. Some even embraced each other as they celebrated their latest breakthrough success. Barret's dad breathed a sigh of relief and put his arm around his wife.
"Wait, just a second," Herzog said, silencing the room. "What does the fMRI say?"
"No response in the amygdala!" The technician happily announced, and the celebration resumed this time with Herzog's blessing.
"Thank God," said Barret's mother, thoroughly relieved.
"Thank you, doctor, you really came through for us," Barret's father said, extending his hand.
Doctor Herzog tightly and vigorously shook his hand. "Glad to help," he said jovially. "I think your son is going to do just fine at the academy and in life. Now that he has the tools to focus totally on success."
"He's going to be a real cutthroat," Barret's dad said proudly. "A few weeks ago, I would never have believed it, but I think he's finally going to be ok."
"When it comes to the question of nature versus nurture, we no longer have to just accept our so-called nature as being unalterable. The defects in Barret that cause him to feel for the weak have been excised now there's just a boy built to succeed," declared Doctor Herzog.
They looked back at the screen just in time to see Barret take a big bite of his Twix bar next to the corpse of the helpless little hound.