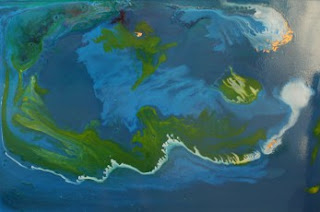 The launch pad was built on a pedestal that loomed in the center of the colony like the enigmatic temples left by extinct societies that litter the revered home planet.  It had become hollowed ground.  A sacred refuge from the encroaching desolation of the industrial graveyard where the cannibalized corpses of mega complexes quietly decomposing.
A ship stood vertically at the very center of the smooth summit like a colossal ornament that pointed towards their native home in the stars. Construction of the towering ship was near completion. The pilgrims gathered around the glowing site to bask in its light. The ship’s idling engines breathed a stream of fire scorching the platform. Tremors emanated out from under the growling titanium behemoth.
The sacred site was the backdrop for the final sermon delivered by their prophet. He stood on an evaluated stage built in front of the elevated launch pad. Painted on the wall behind him was a mural of a blue orb with green amoeba-like shapes spread slashed across the surface. The ball was surrounded by a message written in rusty crimson letters:
The jubilant colonists gathered at the launch site and eagerly awaited the countdown. Making it to this day had been a life and death struggle. Many did not make it. They learned not to mourn the dead because they only had existed to provide flesh to sustain those meant to live.
“Zurück Zur Mutter!”
“You are here with me today because you are the strongest elements of the human race left on this planet!” The prophet’s voice thundered. The jubilant crowd rushed the stage, they crashed into the line of zealous bodyguards that ringed the site.
“Zuruck Zur Mutter Zuruck Zur Mutter!” Chanted the elated rabble.
“We are the final product of a process of distillation as old as time itself. Only a few of us possessed the natural requirements to survive this long outside the true cradle of life. We mourn those we lost, but Mutter demands only the best of us rebuild on her surface!”
The crowd roared its approval. The Prophet raised his hands to the sky to mute the crowd.
“We were abandoned here,” He continued. “The twisted traitors who hoped just to use and discard us never thought we’d last here and so they never attempted to save us. They know humankind is meant only to live on Mutter. They thought we would live just long enough to extract what they needed then we’d simply die!” The prophet's voice took on a tone of rage and indignation,
The crowd took his Que and began to boo and hiss their absent masters light years away.
“They cared more about the rocks that came out of the ground than they did about any one of us. Once they had what, they came for we were deemed expendable. They forgot about us, and we're all the better for it. Little did they know this would be our proving ground. This is where the ones meant to return to the Milky way would be forged!”
A mania swept the mob, and they swarmed against the human wall forcing the guards back.
“The countdown begins now! Soon the ship will be ready, and we will all return to humanity's rightful place in the universe!” The prophet proclaimed.
He turned and exited the stage. His fanatical followers reaffirmed their devotion with a sustained applause. They cheered him as he disappeared into the forbidden monolith. Their exodus was all but certain. Their salvation was in sight. Every second brought them closer to their new meaningful life back on Mutter.
The engines began to hum. It grew louder and louder, and the congregation lost all control.
“It’s time!” one man said tears streaming down his face. The future was arriving. They became intoxicated by their joy. Crying, they embraced each other. They'd endured years of upheaval, famine, and plague but now it was all over. Fathers held up their children so they could see the flames growing in the cylindrical engines. The fire they would carry them to paradise.
The security line broke as everyone raced towards their titanium arch. The engines screamed, and the ground shook under the joyful mob. Red tinted flames burst from the engine and spread out across the launch pad that enveloped anyone that got too close. An explosion shook the ground, and the ship blasted into the sky.
"Don't leave us!"
"Please come back!"
The desperate pleas were drowned out by the screaming rocket boosters carrying away their messiah. Grown men sobbed and children watched their parents slit their wrists and bleed out in the dirt. The forsaken followers watched the burning glow recede into the black sky until it was hardly any brighter than the distant burning stars.