Decay Was The Smelling Salt 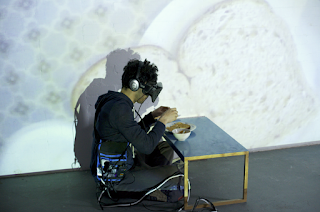 
Captain Ravensheart commanded a flying machine crafted in the image of the iconic vessels that dominated the waves during the age of sail. His wood and steel propeller powered colossus sailed across the boundless blue sky like it was open ocean.

The enormous vessel moved nimbly and quietly through the fluffy white clouds, its esteemed captain, and loyal crew never losing their footing even during the sharpest and most sudden turns.

The valiant captain was engaged in a life or death struggle with the demon admiral Schaden.

Schaden was a spirit that inhabited the corpse of a Nazi submariner who hunted his human prey beneath the waves nearly a century ago.  Schaden starred at Ravensheart, with eyes that glowed like a hellish inferno. He peeled back the rotting flesh on his lips to reveal razor-like teeth. He was a horrific jigsaw of nightmares.

The worse part though was the stench of death that surrounded the admiral like an aura permeating the air around him. Every last detail about him was another incentive to destroy him.

Captain Ravensheart didn't even blink when a radioactive green glow burst from his opponent's decaying flesh. The creature let out a howl that caused the wood of the ship to explode in a cloud of wooden shrapnel.

A spot of blood appeared just beneath Ravensheart right eye and ran slightly down his cheek. Ravenswood gave no reaction Schaden furiously swung his sword at the captain,  Ravensheart blocked the blow with his blade.

The clash of metal produced showers of sparks that poured onto the floor.  Ravensheart jumped back and swung his blade across the Admiral's chest causing it to spring open revealing a slowly beating calcified heart.

Ravensheart pointed his sword at the vulnerable organ, but he was paralyzed by the vice-like grip of sickness on his stomach. The stench of the dead Third Reich officer was now like a gas filling his lungs and stinging his nostrils.

Cause and an amorphous pain quickly weakened the captain, and the next swing of his sword missed the grinning admiral. The captain's vision became hazy from the fumes his arms went limp, and his sword fell to his side. The sickness suddenly squeezed his core and sent him reeling.

The dashing captain was brought to his knees.

Schaden closed in on Ravensheart. He held his blade in the air, and he bore his teeth while he braced himself to give the deathblow.

“They've been looking forward to having you in hell Ravensheart!” Schaden shouted in his demented inhuman voice.

Ravensheart forced his head so he could defiantly look his would-be executioner in the eye. When the ghoulish Admiral started to swing the blood-stained steel downtime slowed so that every moment was like its own frame in a flip book.

His motions felt normal, though. It was the world that slowed down around him. The captain recognizing his opportunity gripped the handle of his sword drove it through the oversized hideous heart of the demon.

It's foul grin twisted into a look of shock.

“I'll have to catch up with them some other time,” Ravensheart whispered to the gasping fiend.

The admiral's putrefied flesh melted off his bones. A frail gaping mouth skeleton was the only thing left of the sinister creature.

Ravensheart calmly got to his feet and kicked his enemies remains overboard. It quietly plummeted to the earth below.

“You did it Ravensheart.” A woman said with a swarthy latin accent.

“Yeah.” said Ravensheart said nonchalantly “but now there's something else I have to take care of.”

He threw down his sword and walked over to the blushing olive-skinned beauty. He pulled the rescued damsel in tight and kissed her passionately. After a moment, he pulled back and looked at her ample breast bursting out of her tightly tied dress. He started to undo the knots that held in the fleshy orbs.

The stench of his vanquished opponent suddenly returned assaulting his senses like a chemical weapon. Ravensheart convulsed, and stomach twisting nausea started shredding his insides. The whole world turned dark and vanished.

Someone pulled the helmet off Martin's head. The fluorescent lighting blinded the pale man, and he held up a bony arm to shield his sunken eyes.

“Ahhhh!” He wailed in pain.

“You're coming with us.” said a rough and angry voice.

Martin felt a strong hand close around his wrist and pull his arm behind his back.

His eyes were adjusting to the light, and slowly the whitewashed world revealed itself to him. He was in a small, grimy apartment surrounded by police. The small room was brimming with garbage where numerous pests had made their home, and the stench of decomposing food drifted over from the sink full of dirty dishes.

The black gloves that simulated the most pleasant sensations of touch in his digital dream were torn away.

“Your gamer days are over asshole.” The officer said as he closed the cuffs tightly around his wrists.

“Give me back my set please!” Martin pleaded.

The cop pulled Martin to his feet.

“Show him.” the officer barked.

Another cop holding something wrapped in white sheets walked over to them. Martin caught the stench of Shandon and gagged.

The sheet was pulled back revealing the waxy lifeless face on an infant child. Its puffy flesh was blackened like bruised fruit and dark blood leaked from its blue lips.

Martin clenched his eyes shut. “Just give me back my helmet!” he screamed.

“Ugh,” the officer grunted in disgust.

They dragged Martin away while he continued to plead for his plastic portal back into the limitless pleasures of the virtual world. A realm where he had abandoned reality. His mind was addicted to the electronic hallucinations and craved the interaction enough to abandon his offspring to starvation, but the death of his child wasn't a comparable punishment to never being allowed to return to the beautiful universe of infinite synthetic fantasy. Life had become hell.