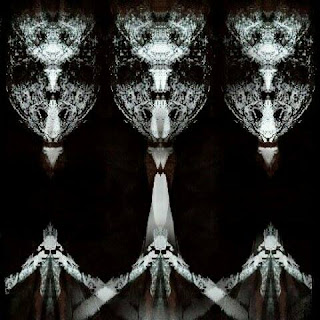 (image from https://www.instagram.com/ozotheclown/)
Cargo Specialist 8271 Corman was a mariner in the eternal sea of space. It was his charge to assure the cargo loaded aboard the ship made it safely to its destination. Like most processes though it had been largely automated so that the human aboard the vessel acted as little more than a caretaker.
The navigation and other critical mission elements were handled by systems he could only interact with on the most rudimentary level. He couldn't adjust the speed, alter the course, every variable was left beyond his control in the invisible hands of processors and anonymous remote operators who kept an invisible tether on the ship from command centers that would take years to reach.
Corman had to work according to the schedule of his titanium surrogate. Checking system statuses as well as checking on the cargo were duties blah performed at precise intervals until he became another mechanical entity.
Most of Corman's time aboard the ship could be described as idle, and he spent most of the time peering out the cockpit window into the unending darkness. The mission was a relatively short one, and there wasn't room to stock up on too many supplies so protocol was dismissed and Corman was sent out alone. His psychological fortitude having first been deemed stable enough to withstand the unfathomable isolation of space.
He kept himself distracted with a constant external monologue, loud enough to drown out the constant humming of the machinery that encapsulated him. When he had nothing to say he would rhythmically tap his foot and hum whatever might come to mind.
The loneliness often proved to be too psychologically taxing; gradually the fatigue became too much, and Corman would spontaneously fall asleep, like the flip of a switch his overwhelmed consciousness would blink out for a few moments before finally mustering the energy to recover.
It was like jumping a few frames ahead. His eyes opened and a tiny fragment of time had suddenly been excised.
A bright blue light had flooded the cockpit. Blahs squinted and let his eyes refocus. Straight ahead was a fracturing sphere of light that had burst open. The empty ring of darkness was outlined by the burning plasma like a celestial eye.
“Oh, shit!” blurted blah jumping from his chair. “S.T.E.M.M!”  (Systems Technology Engineering and Maintenance Management)
“S.T.E.M.M!” He pleaded.
“Cargo Specialist 8271 how may I assist you?” answered a monotonous but appreciably congenital synthetic voice.
“ S.T.E.M.M we're heading straight into a supernova!” Corman said restated noticeably more panicked.
“Tell me how I can best aid you and the mission.” The computer replied as if it hadn't heard blahs terrified warning.
“If you're cargo has been damaged or destroyed say damage or destroyed cargo.”
S.T.E.M.M the goddamn ship is about to be destroyed!” Screamed Corman banging his fist against the wall.
“You are reporting managed or destroyed cargo?” Replied S.T.E.M.M in complete indifference to  Corman's  emotional state. “Is that correct?”
“No, the fucking ship is flying into a giant fucking ball of burning plasma! Blah screamed in a voice that fluctuated up, at least, two octaves.
“Are you reporting a flight path obstruction?” Asked S.T.E.M.M
“Yes!” Barked Corman. He looked out the viewing window they were now too close for him to see the entire shape of the collapsed star. Only the burning blue light filled the windows frame.
“Ok, to ensure the safe arrival of all shipments cargo specialists must report all possible obstructions on their flight path.” The digital interface said in a stern yet friendly reminder. “I will scan our current flight path up to one hundred and sixty thousand miles.”
“We don't have time!” Shrieked the mortally terrified blah.
“This may take a few moments” answered S.T.E.M.M
“If you don't hurry I'll be killed!” Pleaded Corman
“I am compiling the most up to date data possible on our current flight path....this may take a few moments,” replied S.T.E.M.M
Blah hurried over to his station and tried looking for any way to speed up the process or override the automated flight systems. He rushed through a labyrinth of menus and sub-menus. There was nothing he could do besides make requests of S.T.E.M.M
“I have finished analyzing the data, and no obstructions have been detected,” S.T.E.M.M said finally.
“What the fuck do you mean?! Screamed Blah tears were now streaming from his eyes. “I'm going to die!” bellowed Blah.
“I will now return to the main menu.” Said S.T.E.M.M” “If there is anything else I can assist you with you can choose from the following. You can say damage or destroyed cargo. You can say....”
Blah broke down sobbing. He pleaded for his life to an intelligence that could only react within the narrow confines of its programming. It wasn't even allowed to save itself.
The electronic voice of the ship was Corman's only companion as the vessel carried him to his doom. The subatomic remains of Croman and the ship were the only traces they left behind. The dust dispersed quietly into eternity.