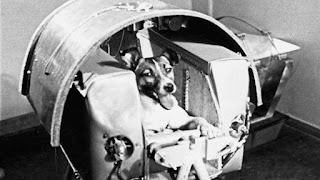 To the little mongrel living a spartan existence in the bustling streets of Moscow, the towers of the old palace and the looming shadows of the monuments to the new system that supplanted the ancient empire had no meaning. They were simply part of a harsh landscape where survival was dependent on will, a little luck, and occasionally isolated acts of charity.
The lonely hound had no one and came from nowhere. She was neither pet nor companion but living refuse. Even in the urban sprawl, survival was as uncertain as it was even in the deepest wilds of Russia. What were the odds that they would find her?
Who in this world could trace the sequence of events that lead up to this unassuming stray being destined to meet her end at the edge of the final frontier? How could it be that fate had these designs for her to be the center of what humanity considered to be one of the most momentous events in its history?
When they took her for a brief moment, she suspected she might have been saved from a cold and lonely death on the streets of Moscow, but that salvation turned out to be little more than false hope.
The canine could not perceive the passage of time in any measured way, like its human captors. She was kept locked in a cage, and the only time she was let out was when she was forced into even tighter confines.
The psychological and physical decay set in quickly, and soon, her body ceased to function as it had. There is no recorded grieving process for dogs. As far as humans know, canines live blissfully unaware of their own mortality. The engineers understood the intricacies of their own titanium creations, but they lacked the capacity for empathy when it came to anything outside the realm of the mechanical.
When she was finally let out for good, she was put under, and the final hours of her time on earth were spent in the fog of anesthesia. When she came to, she was chained to the inside of a small titanium pod. A constricting harness was wrapped around her body. Wires merged her with the mechanical capsule.
A human walked up and gave her a kiss on the nose and a pat on the head. Affection was unfamiliar to her, and only on the edge of death would she ever experience it.
“Bon voyage,” whispered the human.
She could only respond with dark marble eyes that twinkled with despair.
The capsule closed around the frightened animal, and the roar of the rockets as they powered up shook her fragile body. The crude spacecraft shot up from the ground carrying the bewildered animal to die in the cold emptiness of space.