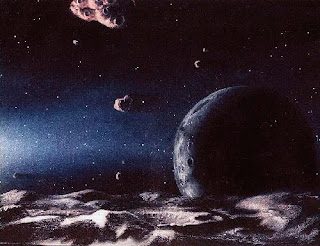 The fleet of ships that now held what remained of humanity inside their titanium hulls hovered at the edge of space. The mood was somber as everyone waited in a quiet tension pendulating between despair and mind-shattering terror. The powering up of the colossal nuclear engines sent gale force winds ripping across the planet.  This was the beginning of their latest exodus, just another jump on their way to the last.
Human civilization's only hope rested with an asteroid that was hurtling in their direction. The appearance of this interstellar ballistic was heralded as a miracle, and indeed it was their only hope of escaping the world they devoured. When it screamed past the desolated little planet, they would launch themselves at the oncoming cosmic projectile it in a desperate attempt to cling to its jagged surface. It's projected trajectory was set to take it just outside the orbit of a small planet dubbed Toba. An infinitesimal but livable world.
There wasn't enough fuel to get to Toba on their own, and the asteroid moved with a far higher speed than their vessels ever could. A significant portion of what they had left was going to be used landing on the asteroid. Riding on the back of the planetary fragment was their only means of reaching what would probably be their last sanctuary in the cosmos. It was one more chance to continue their process of perpetual Armageddon.
It had been almost 18 years since they last made a jump.  The society and the machines that sustained it was being starved of every necessity of life. The last time these nomads attempted to ford their way just a little deeper into oblivion, thousands had died. Forlorn people watched helplessly from observation decks as ships carrying their families missed the mark and drifted away into the nothingness of space disappearing into the dark forever, as deadly a proposition a jump was staying where they were was suicide.
There was a cynicism prevailing among the dwindling population forced to face, at least on a subconscious level, the prospects of the homo sapiens obliteration. As the deprivations grew in severity and permanence, empathy disappeared.
It had been generations since humanity had set foot on the little green and blue orb that had facilitated its birth.
The people born in the confines of the Leviathan vessels spent much of their lives in a synthetic habitat, never knowing the touch of earth or the warmth of sunlight. Just as they trusted their decimated celestial home to provide for them, to cultivate its own terminal sickness, they were now dependent on an artificial system that existed in a world of algorithms and binary code.
It was an intelligence that far exceeded that of its architects, but that is precisely what made it vulnerable to failure. Imperfection can never create perfection.
The remnants of civilization and very likely the last generation peered into space, waiting for the furiously burning tail of the asteroid to come into view. In an instant, their engines fired, and the armada blasted itself, full speed at their new host. The ones that survived the jump and landed safely on its surface would use it to simply propel themselves ever deeper into cold eternity.