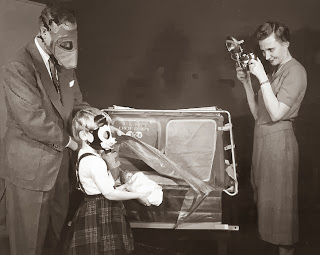 John sat at a small desk in his room illuminated by the light of a solitary lamp. The boy was intently examining the palms of his hands. The color had left the flesh and thought he could still move them the feeling had gone as well. He clenched one hand then the other. He clenched his fists and dug his fingernails into his flesh as deeply as he could. He felt nothing. He looked back down the nails had peeled back the waxy white skin but no blood ran, this numbness ran through his entire body. While he could still move and function normally,  his body had no feeling left like his head had been severed.

He looked at his wrists the crisscrossing veins had turned a dark blue and looked like they were rising from the skin. He followed the blood vessel's path up his arm and began to roll back the sleeve of his navy blue sweatshirt. Once he got to his forearm, he could see the slimy back side of a maggot. He felt the disgust he would expect, but for some reason, the experience did not startle him. He didn't shake, and he didn't gasp. There was no quick reaction to the terror.

He pulled the sleeve back further revealing gangrenous flesh being feasted on by dozens of the slimy larva.

“Mom!” He screamed. His cry reverberated throughout the house. Kelly heard him from the downstairs kitchen, and the words were enough to make her adrenaline gland start pumping the chemical fear into her veins.

She jumped from her chair and ran for the stairs.

“Hold on I'm coming!” She called back.

She bursts through the closed door. Her son was standing there shirtless. The maggots were squirming in the holes they ate through his body. Their collective eating made an audible slithering noise that made Kelley's stomach rise into her throat.

“Oh my god baby, oh my god!” She cried out hysterically.

“Mom help!” John squealed reaching out to her.

The flesh was eaten away by the maggots, and the spreading necrosis revealed the extent to which the engineers and doctors had changed the boy's body. Gleaming metal emerged from under John's degrading biological form. Dissolving flesh revealed the wiring that ran through the boy's body and integrated with his neural network.

She rushed him to the clinic owned by Micro Adventists, her employer. The bereaved mother waited in the hallway just outside the private room waiting on news about the son she wasn't allowed to see. She was left alone to be crushed by her worry and choked by her guilt.

“How could I have done that to my baby?” The thought echoed in her mind.

They sold Kelly a dream. She was a simple secretary at a company that had engineers with 6 figure incomes and executives with salaries several times even that. She knew as her John would most likely work for their children, and that was the best he could hope for. That is until the day she was offered a deal that seemed akin to having a wish granted.

The company had begun its new human modification program. Soon people would be able o customize themselves, and they offered Kelly the chance to get in on the ground floor. Once the procedures were complete John's peers would be unable to match him athletically or intellectually. Seeing this as a one-time chance to assure his future she hastily agreed.

She remembered the moment like it was a nightmare. Something she didn't want to believe was real, but her mind couldn't distance itself from enough. Fear and remorse washed over her, and she began to sob.

Kelly quickly wiped the tears away and looked up at the tall female doctor.

“Is it about my son?” She stammered through her tears.

“Miss Greary I'm afraid we couldn't save him.” The nameless doctor informed her coldly.

The tears pooled in Kelly's eyes, and she fell over herself sobbing. The doctor watched in silence.

“Oh, my God autopsy.” Kelly fell to her knees. The tears pooled in her eyes and descended like raindrops onto the white tile floor.

“Where is he?” Kelly asked.

“I'm sorry Miss Greary I can't let you see him yet.” The doctor said.

“The enhancements in his body are still property of …..I'm afraid this will have to be kept confidential for now.” The doctor said.

“He's my son!” Kelly shrieked as she pulled herself up and grabbed the doctor by her shoulders

“He's my son you have to let me see him!” She begged. Her hands dug into the doctor's shoulders.

The woman was silent for a second.

The doctor opened the dark room revealing the blood-drenched polymer and metal frame of Kelly's darling boy. They had cut away most of what had formerly been her son, and now all that was left was connective tissue holding together metal, plastic, and bone. They had only left his face and hands.  His unblinking eyes stared across the room seeing nothing. Frayed wires were snaking out from his body like gnarled veins.

Kelly had no words; her flesh grew cold, and Joh's colorless eyes made goosebumps rise on the back of her neck. She stumbled over to his bedside.

He didn't reply. Kelly looked down at the bloody metallic rods that ran into the mostly intact flesh of his hands. She closed her hand around his. It was one of the small portions of her boy that still at least looked human. When she gripped his hand what was left of the cold flesh wrapped around the cybernetic fingers suddenly closed.

She looked up at the doctor standing by the closed door.

“He can't feel you,” she explained. “Those are the sensors in his fingers tips. They are aware something in his hand, so they've ordered the fingers to grasp. It's more or less the processor still working even though they body around them has died.”

"When did he die?" Kelly strained through her tears.

"48-72 hours ago by our estimate." Snapped the doctor. "Its still possible for primary systems to function even after the subject has died. The necrosis would have continued to spread.

The doctor stared coldly and silently shut the door.

What was sold to Kelly as simple biomechanical upgrades and some basic nano implants was a complete physical overhaul of John's physical body. They hollowed him out and left a network of hardware and processors. It was as if his flesh was painted on, simple aesthetic detailing of a machine's interface.

John was Kelly's son, but to the Micro Adventists research department he was a failed experiment, something to be locked away forever from the light of day. The child that had been eaten alive by maggots was simply a PR nightmare for the tech firm.