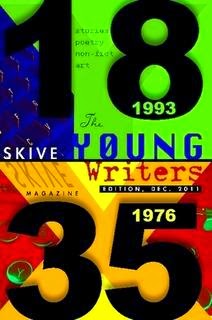 He put his face into his hands and began to sob. He remembered what his father had told him, the monster had eaten him and now shat him out into space. As he plunged through oblivion, he stood at a point between life and death. Although he still breathed, he no longer existed. He would talk to no one and no one would talk to him. He was just a speck of dust floating through the never-ending void. And although he had provisions to last for months, he knew he was already dead.
This story was printed in Skive Magazine's "2011-2012 Young Authors Edition". Skive Magazine always publishes fantastic collections that will have something to satisfy fans of any genre.
http://www.skivemagazine.com/